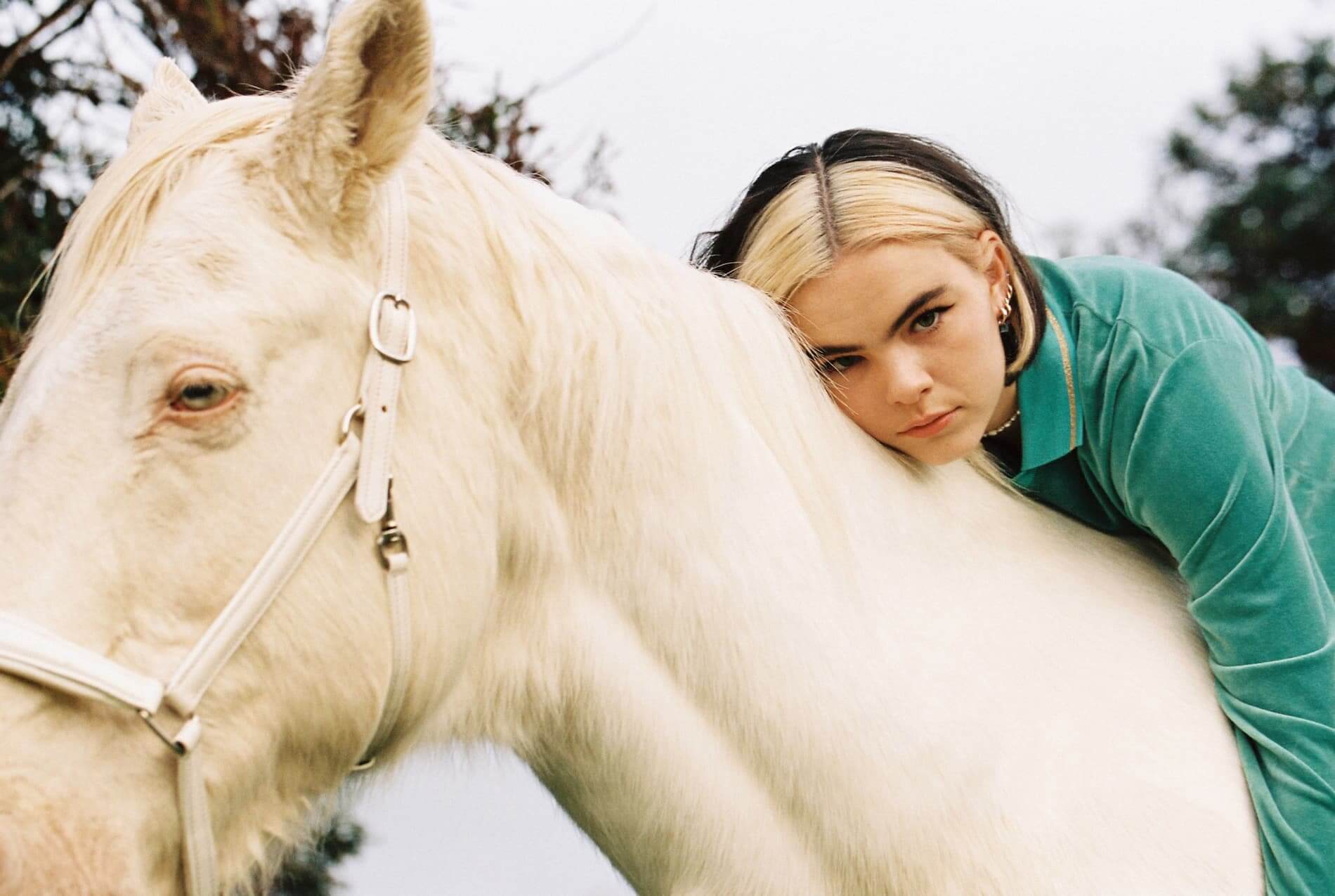 From her hometown in Auckland, New Zealand, breakthrough popstar Stella Bennett, aka BENEE, sounds unphased, unchanged and almost impervious to the cataclysmic success coming her way since releasing her debut EP last summer. Already her tale is one of eye-watering statistics and achievements: close to ten million TikTok videos made to her latest single “Supalonely” featuring Gus Dapperton, hundreds of millions of streaming numbers, the most added song on U.S. Top 40 radio and a collection of platinum records in her home country. Her story is international and expanding on the hour, across modern and traditional platforms. Her audience seems endless. BENEE, however, remains easygoing, centered and—most importantly—herself.

It’s not yet six months since the release of her second EP of 2019, STELLA & STEVE (follow-up to debut FIRE ON MARZZ), garnered knockout reviews. Breakthrough track “Supalonely” is a slice of upbeat and original pop—like its creator, a little exotic and cheerfully weird. The song hits like a ray of sunshine, jammed to the hilt with personality and punctuated by BENEE’s verbal tics. Her loneliness is not just empowering, it becomes super-powered as she sings, “I’ve been lonely, mm, ah, yeah…Lonely (I’m a lonely bitch)”

“I had broken up with my boyfriend,” recalls BENEE.  “I wanted to twist the fact that I was sad and irritated about the relationship ending—so I wrote the song poking fun at myself.” Self-deprecation comes naturally to BENEE, expressed through her playful personality both on stage and online, an explosive riot of randomness that makes her all the more intriguing. However, if we can’t pin Stella down, who is this STEVE?

“From as early as I can remember, Steve is the name I’ve always given weird objects or things that I’d find or animals,” she laughs, recalling growing up in suburban Auckland, where she still lives in her childhood home. “And Steve is the name of my car!” BENEE stands on top of Steve on the artwork for her latest EP.

STELLA & STEVE begins with the funk of “Find An Island” (inspired by an argument she had with her best friend that culminated in her wanting to escape the conversation to some other paradise) and ends with the jazzy psychedelic trip-hop of “Blu” (also about her breakup). BENEE’s music runs the gamut of everything pop can be in 2020 and is filled with her quirks in the experimental indie sounds and the cartoon-ish sprawl of her lyrical imagery. Visually inspired, BENEE is dyslexic but finds it easy to trap words in her songwriting.

BENEE herself is not at all attached to the notion of genre—or any categorization, or rules for that matter. “I like eclectic random vibes,” she says. “That’s my thing with everything—fashion and arty stuff. It’s kinda messy.” She’s an anomaly in the pop sphere, truly unlike anyone else. Her authenticity is immediately apparent. “I don’t do anything that I don’t wanna do because it doesn’t make sense to me,” she explains. She’s not dressing to impress, and she is unafraid to just be herself: an oddball, unapologetically Kiwi, very humble and self-effacing. “I don’t know if I’m ever gonna get used to the success to be honest,” she says. “I’m in this constant mind-blown state where everything’s very surreal.”

Growing up, she says she “felt like a bit of a weird one, and I’ve always felt a bit like I’m on my own buzz.” She played sports and dabbled on guitar and saxophone at school, but BENEE’s music career began in earnest when her voice caught the ear of local producer Josh Fountain,  a member of cult New Zealand group Leisure, in 2017. She had recorded a set of GarageBand covers, from the likes of Gnarls Barkley and Amy Winehouse, and posted them to SoundCloud “mainly for friends.” She soon found herself in Fountain’s Golden Age studio using whatever free time was available in her final school year to explore the intriguing world of sounds and words that was to become BENEE.

At the end of 2017, she tested the waters by releasing the instantaneous “Tough Guy,” but still focused on her education, she began 2018 as a first year at university. Two weeks in, however, she could only think about music and what she might have been giving up. “I went home and cried to my mum,” she recalls. “I thought I’d be so upset if I’d finished a uni year and not given music a full shot. She told me I could go to university when I’m 40, so fuck it who cares. I dropped out that Friday and went straight back into the studio.”

Juggling evening shifts working as a restaurant dishwasher and at a pizza joint, she created more tunes and in mid-2018, BENEE released her undeniably catchy hit “Soaked” to viral success. It was a relief. Australian influencer radio station Triple J began to play it. “I was like – Oh my gosh maybe I have made the right decision,” she says. Soon labels were calling across the world to New Zealand, and within months she had inked a deal with Republic Records in New York.

Now a major label artist, she revels in calling the shots, and yet also remains bowled over by the opportunities she’s been granted and the experiences coming her way. She seeks out collaborators, whether it is enlisting Spanish artist Ricardo Cavolo for her FIRE ON MARZZ EP artwork or inviting laconic Kiwi Jack Berry (on “Drifting”) and New York indie jitterbug Gus Dapperton (“Supalonely”) for vocal features on STELLA & STEVE. Six months of touring the world has taken her places she’d never been before, and when she arrives on stage her crowds are singing her lyrics back at her. “It’s insane to me,” she says.

Her fans have a naturally intimate connection with her deceptively easy-going pop and that thing she still loves to call her “BENEE-VISION.” In general, she’s a beacon of positivity, even in the darkest of times. She’s a homebody—as chilled in person as her music; the cool girl with her bandwagon of Steves who’s quietly taking over the globe.